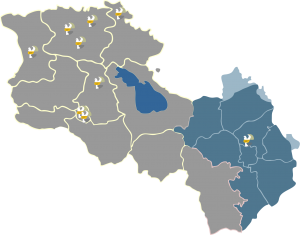 The Union of Greek Communities of Armenia includes non-governmental organizations operating in Armenia and Artsakh, whose main purpose is to consolidate the Greek population of Armenia, to spread Greek culture and Greek language.

Currently, the following communities are included in the Union of Greek Communities of Armenia:

“Akmi” Greek community of Alaverdi involves Greeks living in Alaverdi and the surrounding villages. There are also a puppet theater and a Greek choir in the community.

There is also a Greek Medical Fund “Hippocrates” in Alaverdi, led by Greek surgeon Simon Zakharov.

“Ilios” Greek Community NGO of Yerevan was founded in 2009 in Yerevan. The founder of the organization was Slava Rafaelidis. Since its establishment, Ilios has been publishing a homonymous newspaper (Karine Karapetyan, editor of the newspaper) that covers the daily lives of Greeks in Armenia, events, Greek customs, cultural and political news. The newspaper articles are presented in three languages: Armenian, Russian and Greek.

“Patrida” Greek community of Armenia has published the “Byzantine heritage” information-analytical magazine for many years.

The Greek “Olympօs” community includes the population of Noyemberyan and surrounding villages. Greek courses are also provided in the community. Teacher: Anushik Hakhoyan.

“Ellada” Greek Community NGO of Shirak region was founded in 1998 in Gyumri. The community was first led by Karine Tosunyan. She was followed by Presidents Vrezh Kutikov and Mikhail Izmirov.

There is also a dance group in the community, where Greek dances are taught.

The organization also teaches Greek three times a week. The lessons are taught by Mushegh Titanyan.

Pontos Greek NGO of Stepanavan was founded in 1994 by Yakov Nikolaidis. It was followed by Presidents Roman Arabov and Alexander Khristoforidis. The community includes the Greek population of Stepanavan and the surrounding villages, particularly Yaghdan and Koghes.

Greek teachers Ilya Triandafilov and Aida Lazareva have been teaching Greek for years. The youth of community members have repeatedly participated in youth camps and forums.

If you have Greek roots and would like to register in one of our communities, please fill out your details: