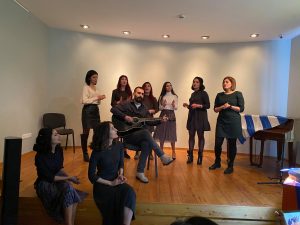 February 9 is the commemoration day of the great Greek poet, author of the Greek national anthem Dionysios Solomos, and it is no coincidence that in 2017 it was declared as an International Greek Language Day. On this day in different countries of the world, where there is a Greek Diaspora and where the Greek language is taught various events are held.
In the frameworks of the International Greek Language Day, the Greek Youth Coordinating Committee of Black Sea and Central Asia Region together with the Faculty of Greek Philology and translation of Mariupol State University invited everyone to take part in the #Greek_language_challenge action #It_is_cool_to_speak_Greek and try to pronounce a few words in the language of Plato, Socrates, and Aristotle. To participate in this action it was required to record a video by saying a few words and share it. Greeks and philhellenes of Armenia also participated in that action, recording many videos that were also covered by Greek media.
On February 9, in the framework of the International Greek Language Day, the Union of Greek Communities of Armenia organized a literary event at the Martiros Sarian House-Museum, which was attended by representatives of the Greek Embassy of Armenia, members of Greek communities and other guests. The event aimed to highlight the works of great Greek poets in the Armenian language, excerpts from the speeches of Greek poets who were awarded the Nobel Prize for literature.
As was mentioned during the event, we are lucky to speak Armenian as its rich vocabulary allows us to do the translation from the language with a history of over 25 centuries as closely as possible. The works of Yannis Ritsos, Odysseus Elytis, Kiki Dimoula, Konstantinos Cavafy were read during the event (translated into Armenian by Shushan Karapetyan, Shamrik Khachatryan and Maria Lazareva).

At the end of the event, the representatives of the Greek Embassy in Armenia took a tour in Museum and got acquainted with the works of the great Armenian painter guided by Mrs. Ruzan Sarian.