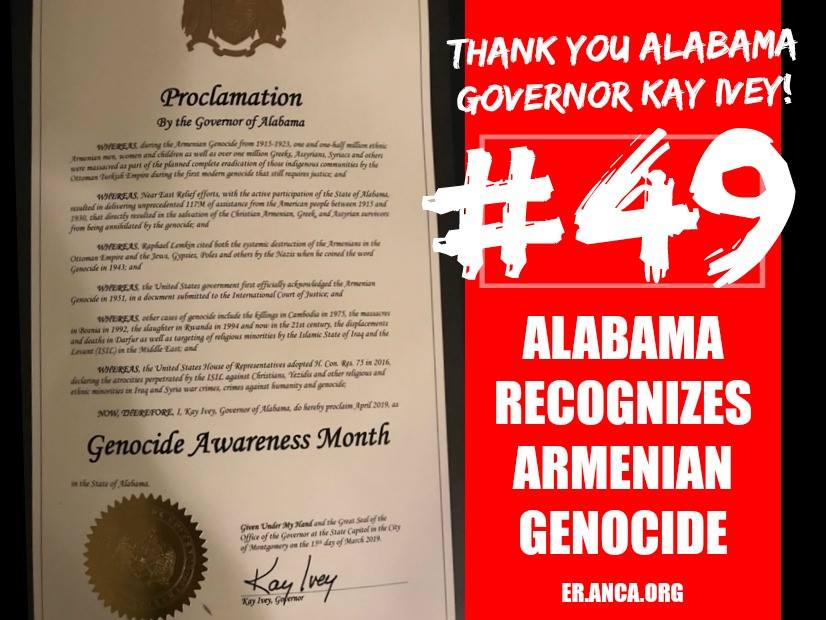 “We welcome this proclamation by Governor Ivey, making Alabama the 49th state in the union to officially re-affirm this international crime against humanity,” said ANCA-ER Board Chairman Steve Mesrobian. “This proclamation serves as a powerful reminder that truth about genocides should never be held hostage to the denial of its perpetrators and those who continue to profit from that crime. We salute the Alabama Armenian community and our ANCA coalition partners who together stand united in our efforts to create awareness about the Armenian Genocide and prevent future such atrocities,” said Mesrobian.

While Governor Ivey’s proclamation notes that the Ottoman Turkish government’s crime “still requires justice,” it also provides a glimpse into Alabama’s active participation in the Near East Relief’s efforts during the Armenian Genocide  resulted in delivering unprecedented 117 million dollars of assistance from the American people between 1915 and 1930, that directly resulted in the salvation of the Christian Armenian, Greek, and Assyrian survivors from being completely annihilated by the genocide. The proclamation recognizes genocides that followed the Armenian Genocide as well as the act of genocide committed against the people of Cambodia, Rwanda and Bosnia.

The Governor of the State of Alabama, proclaimed April 2019 as GENOCIDE AWARENESS MONTH.

With the addition of Alabama as the 49th state, Mississippi remains as the last U.S. state to officially recognize the Armenian Genocide.